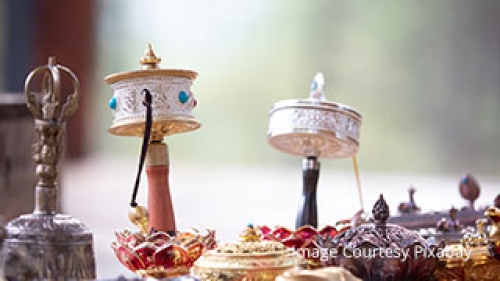 Thimphu is the capital of Bhutan and the largest town in Bhutan. It lies at an altitude of 2400 metres. All government headquarters and centre for trade are located here. The following are the places of tourist attraction in Thimphu.

Meaning “fortress of the glorious religion “was initially erected in 1641 and rebuilt by King Jigme Dorji Wangchuck in the 1960s. It is one of the largest Dzong in Bhutan. The Dzong houses the throne room and office of his majesty and is the seat of government and religious affairs in the kingdom. The northern portion of the Dzong has the summer residence of the central monastic body and his holiness the Je Khenpo (chief abot). It is open to visitors only during the Thimphu Tsechu (held in autumn) and during winter when the monk body moves to punakha.

Built in 1627, it is the oldest Dzong in the country. The most noteworthy artistic feature of this Dzong is the series of over 300 finely worked slate carvins behind the prayer wheels in the courtyard which are centuries old the paintings inside this Dzong are believed to be some of the oldest and the most beautiful in the country.

The National Library was established in the late 1960s and it houses an extensive collection of Buddhist literature mostly in block-printed format and some works are several hundred years old. There is also a small collection of books in English on the ground floor mainly on Buddhism, Bhutan, the Himalayan region and neighboring countries.

Commonly known as the painting School is an institute established primarily to preserve and promote Bhutan’s unique artistic tradition which played a vital role in moulding its distinct heritage. The Institute offers a six year course on the 13 tradition arts and crafts of Bhutan and on a visit one can see students learning the various skills taught at the school.

The Institute was established in 1967 as a center for indigenous medicines and practice. In olden times. People primarily relied on the indigenous medicines to cure their illness. The Institute also serves as a training school for traditional medicine practitioners. The complex is closed to visitors due to considerations of hygiene, but one can still walk around and view it from outside.

Located at a short drive from Thimphu city centre, visitors can get a good overview of the Thimphu valley from the Buddha point (Kuensel Phodrang). You can pay your obeisance and offer prayers to the Buddha, the largest statue in the country and then walk around and take a glimpse of the valley.

Located on lush hillside about 10km from the city, the gardens offer a peaceful and relaxing environment to spend a few hours. Botanists will find the wide selection of indigenous trees and plants of interest.

Located on the banks of the river (near the city stadium), these 5.6 acres of parkland offer a pleasant and relaxing environment to stroll or to sit and watch the river flow by.

It is dedicated to connect people to the Bhutanese rural past through exhibits, demonstrations, educational programmes and documentation of rural life. The principal exhibit in the museum is a restored three storey traditional rammed mud and timber house, which dates back to the mid 19th century. The design and form of house is that of an average household in the Wang area during that era. The age of structure demonstrates the durability and performance of the building materials. From ground to top floor, household objects, typical domestic tools and equipments that would have been used by a family during that period are put on display. The museum is also developing some of the native trees and plants that were used for various domestic purposes in the rural households.

Every Saturday and Sunday most of Thimphu's scant population and many valley dwellers congregate on the banks of the river where weekend market is held. It is an interesting place to visit and provides opportunity to mingle with the local people.

The beautiful valley of Paro encapsulates within itself a rich culture, scenic beauty and hundreds of myths and legends. It is home to many of Bhutan's oldest temples and monasteries, National Museum and country's only airport. Mount. Chomolhari (7,314m) reigns in white glory at the northern end of the valley and its glacial water plunge through deep gorges to form Pa Chhu (Paro River). Paro is also one of the most fertile valleys in the Kingdom producing a bulk of the locally famous red rice from its terraced fields. Places of interest in and around Paro:-

Built in 1646 by Shabdrung Ngawang Namgyal, the first spiritual and temporal ruler of Bhutan, the Dzong houses the monastic body of Paro, the office of the Dzongda (district administrative head) and Thrimpon (judge) of Paro district. The approach to the Dzong is through a traditional covered bridge called Nemi Zam. A walk through the bridge, over a stone inlaid path, offers a good view of the architectural wonder of the Dzong as well as life around it. It is also the venue of Paro Tshechu, held once a year in the spring.

One time watch tower built to defend Rinpung Dzong during inter-valley wars of the 17th century, since 1967 Ta Dzong is serving as the National Museum of the country. It holds fascinating collection of art, relics, religious thangkha paintings and Bhutan's exquisite postage stamps. The museum circular shape augments its varied collection displayed over several floors.

This Dzong, with a delightful village nestling at its foot, was built in 1646 by Shabdrung Ngawang Namgyal to commemorate his victory over the Tibetan invaders. Historically and strategically this Dzong withstood all its glory and was featured in 1914 vide National Geographic magazine. The glory of Drukgyel Dzong remained even when it was destroyed by fire in 1951. On a clear day, one can see the commanding view of Mount. Chomolhari from the village, below the Dzong.

It is one of the oldest and most sacred shrines of the Kingdom dating back to 7th century (the other is Jambey Lhakahng in Bumthang). The lhakhang complex is composed of two temples. The first temple was built by Tibetan King, Songtsen Gampo in the 7th century and in 1968, H.M. Ashi Kesang, the Queen Mother of Bhutan, built the second temple in original pattern.

To the west of the road is Dungtse Lhakhang, a chorten-like temple. This unusual building was built in 1433 by the iron bridge builder Thangtong Gyalpo. It has three floors representing hell, earth and heaven and the paintings inside are said to be some of the best in Bhutan.

Beyond Dungtse Lhakhang, to the east of the road, the tiny Pana Lhakhang is quite old and is believed to have been built in the seventh century.

Punakha served as the capital of Bhutan until and still it is the winter seat of Je Khenpo (the chief abbot). Blessed with temperate climate and owing to its natural drainage from Pho Chhu (male) and Mo Chhu (female) rivers, the Punakha valley produces abundant crops and fruits. There are splendid views of the distant Himalayas at Dochula pas (alt. 3,050m) on Thimphu – Punakha road. Places of interest in and around Punakha

Built strategically at the junction of Pho Chhu and Mo Chhu rivers in 1637, by Shabdrung Ngawang Namgyal to serve as the religious and administrative centre of the region, Punakha Dzong has played an important role in Bhutan's history. Damaged by four catastrophic fires and an earthquake, the Dzong has been fully restored by the present King. The Dzong is open for visitors during Punakha festival and in summer months when the monk body moves to Thimphu.

A beautiful hike takes one to the regal Khamsum Yuelley Namgel Chorten, which was built to remove negative forces and promote peace, stability and harmony in the changing world. The Chorten dominates the upper Punakha Valley with commanding views across the Mo Chhu and up towards the mountainous peaks of Gasa and beyond.

Documents required to enter in Bhutan are

The following points are to be noted for Child rate:-

(Hotels are very strict with the child policy. Please carry the age proof so that it can be produced when asked)